Barsaat (English: Rain) is a 1995 Indian Hindiromanticaction film, which was the debut of Bobby Deol (son of veteran actor Dharmendra) and Twinkle Khanna (daughter of late actor Rajesh Khanna). The film was directed by Rajkumar Santoshi. The movie was initially titled Jaan, later changed to Meri Jeet, then Jeet and then Satwa Asmaan, before the Deols settled on Barsaat.

Both Deol and Khanna won the Filmfare Awards in the Best Debut categories. Incidentally, after 10 years, Deol worked in a 2005 film of the same name.

Badal (Bobby Deol) is a naive but intelligent young man who comes from a small village to the big city to attend college. He is introduced to city life by Damru (Harish Patel), who calls himself Danny. When Badal attends college, he meets pretty and precocious Tina Oberoi (Twinkle Khanna) and, after a few misunderstandings and misadventures, they fall in love.

This relationship is not approved of by Tina's wealthy widower step-dad Dinesh Oberoi (Raj Babbar), who hopes to takes all her wealth. He is waiting for Tina To turn eighteen. His friend (Bharat Kapoor) wants his son to get married to Tina and divide the whole wealth. Once his son finds out about love of Tina and Badal, he complains to the college principal (Vijay Kashyap), that Badal has been responsible for sexually harassing a girl at the college one night, but Tina testifies in favour of Badal and insists he's innocent for the wrongdoing. Dinesh then asks a corrupt cop, Negi, (Danny Denzongpa) the city's assistant commissioner of police, for assistance.

Negi arrests Badal on trumped-up charges and imprisons him. Badal's widowed dad Bhairon (Mukesh Khanna) comes to the big city to try to make sense of why Badal is in prison. Dinesh gives a contract to Negi to have Badal killed. Negi agrees and hires a gang of ruthless outlaws to hunt and kill Badal. Both of them run away to Badal’s village. However, Negi reaches there and threatens the villagers. To save the villagers, Badal gives Tina sleeping tablets by lying to her that both of them are committing suicide. He then surrenders himself to Negi.

When Tina wakes up, she finds herself in the custody of her step dad who tries to kills her by giving her poison, but her friend tells her the truth as now he realises the true intention of Dinesh who never wanted Tina to get married to his son.She is obviously shocked to find the truth and run in car.

By this time, Badal and Negi had a face off where Negi is killed (As shown) by Badal and now he comes to save Tina from Dinesh who is behind her to kill him.Both of them are fighting on the hill where Tina pleads Badal not to kill Dinesh as she consider him her father.However, Negi again comes to kill Badal and saved by Dinesh.Negi is finally killed by Bhairon and two others. At last, Tina and Badal unite with the dying Dinesh, approving their match and apologising for his deeds.

Initially, Shekar Kapur was set to direct this film and had shot a scene with Deol.[2] However, he left the film for Bandit Queen and Rajkumar Santoshi took over as director. He had both the lead actors attend workshops. While shooting a scene in London, Deol suffered a leg injury and had to use crutches for over a year. He continued shooting for the film Gupt: The Hidden Truth with his injured leg.[3] A few scenes were shot at Rohtang Pass near Manali, Himachal Pradesh. Khanna fainted once while filming there. Reportedly both the lead actors did not go along well during the shooting. Deol irritated Khanna on many occasions and the latter found it 'obnoxious'.[4]

Its total net gross collection was 29 crores and it was declared a 'Super Hit' grosser by Box Office India. It was also the 5th highest-grossing movie of the year.[5]

The film score of Barsaat was composed by Louis Banks while the songs were composed by Nadeem Shravan with lyrics penned by Sameer.

The songs of the film are popular even in 2020, especially 'Humko Sirf Tumse Pyaar Hai' and 'Nahin Yeh Ho Nahin Sakta'.[6][7]Hindustan Times called the latter song 'the definition of the lovelorn ‘90s' and '[s]till the most played song on every desi diljala aashiq’s list'.[8] 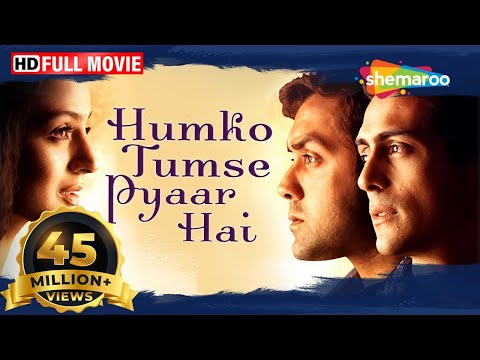 Barsaat was a 'hugely-anticipated film'.[7] Writing for Rediff.com, Sukanya Verma called it 'not a great movie' but was appreciative of Santosh Sivan's cinematography, especially during the song 'Nahi Yeh Ho Nahi Sakta', noting that the 'freshness enveloping Sivan’s visuals in the song ... choreographed by Farah Khan, continues to satisfy' and 'I love the luminously lit frames, the use of fresh paint and mirrors and a gorgeous play of pristine white and bright yellow.'[9] A review in India Today noted that the film lacked a script and is 'yet another collection of cliches'. It found the songs 'mediocre' and concluded with '[t]he best part is that two stars are born'.[10]

Tulsi Kumar Dua (born 15 March 1986) is an Indian playback singer, RJ and host who works in the Bollywood industry. She was born to businessman, film producer and the founder of T-SeriesGulshan Kumar and Sudesh Kumari. She has two siblings, Khushali Kumar and Bhushan Kumar.[2]. She is married to Hitesh Ralhan since 2015 with whom she has a son named Shivaay Ralhan.

In 2009, her debut album, Love ho Jaaye, was released. Along with the album, Kumar made a music video for the title track. Her song 'Mujhe Teri' from the movie Paathshaala and 'Tum Jo Aaye' from Once Upon a Time in Mumbai became hits. She has worked with Guru Randhawa, Himesh Reshammiya, Pritam, Anu Malik, Amaal Mallik, Mithoon, Jeet Ganguly, Arko Pravo Mukherjee, Meet Bros, and Sajid-Wajid, among others.

She sang the song 'Mainu Ishq Da Lagya Rog' in 2015, through which her sister Khushali Kumar made her screen debut. It is a recreated version of the original song from the movie Dil Hai Ke Manta Nahin.

In May 2020, Kumar released a song during lockdown named Tere Naal along with Darshan Raval. Later She came up with a romantic ballad Naam along with Millind Gaba which won many hearts. In October she released another pop rock romantic song Tanhaai which featured Zain Imam which again has won millions of hearts.

Tulsi Kumar was born as Tulsi Kumar Dua on 15 March 1986 in a Punjabi Hindu family to businessmanGulshan Kumar and Sudesh Kumari.[5] She married Hitesh Ralhan on 18 February 2015 in New Delhi.[6]Divya Khosla Kumar is Tulsi's sister-in-law. She is the daughter of the founder of T-Series, giving her immediate access to India's biggest record label. On 24 December 2017, Tulsi gave birth to a son who was named Shivaay Ralhan.[7]